Artisan commands in Laravel are truly a blessing. I mean you could create just about any files be it controllers, models, middleware, provider by knocking a simple command from the CLI. For instance, if you want to create a model named Post you could just fire the following command…

…And a new Post.php model is created in your project under App directory like so.

You can create a controller or any other files the similar way. You can check all the available artisan commands by firing php artisan list command.

Now, as you can see, each command has sort of a template associated with them in which there some variable values which gets replaced by the user provided input. For instance, in above make:model Post command, Post is assigned as a class name in the Post.php file. These template files are called “Stubs”.

A typical Model stub file (model.stub) looks like the following.

Here, {{ namespace }} and {{ class }} are variables in the stub files which gets replaced based on the user input in the corresponding artisan command. This is, as you can see, pretty basic skeleton for a model class. What if you want more content in the same, ready to be consumed by you and your team. A template just for your needs? This is where Laravel 7’s stub customizations comes into play.

Laravel 7 comes with an additional Artisan command stub:publish which can be used to publish the most common stubs for customization. So, what you do is run the command,

And the command will create a directory called stubs at the root of your folder which will contain all the published stubs. The directory contents looks like so. 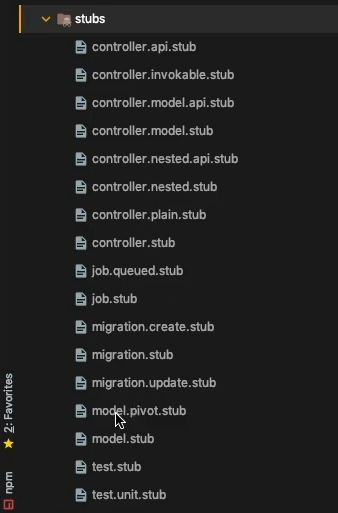 As you can see, we have all the stub files that Laravel used to utilize in Artisan commands. Now, all you have to do is make changes to this stub files according to your needs and it will be reflected when you generate their corresponding classes using Artisan make commands.

So, for instance, you want to customize the model stub to have $guarded and $fillable properties pre-populated and maybe you also want to use SoftDeletes on your models, you would customize stubs/model.stub like so.

And the next time you use make:model command, you’ll have all the models which is based on the above template.

Previous: Fluent string operations in Laravel 7 Next: Custom validation rules and messages in Laravel form requests
Learn the fundamentals of PHP 8 (and 8.1), the latest version of PHP, and how to use it today with my new book PHP 8 in a Nutshell. It's a no-fluff and easy-to-read guide to the latest features and nitty-gritty details of PHP 8. So, if you're looking for a quick and easy way to PHP 8, this is the book for you.
Grab your copy now! Read a sample