Since my blog is built on to of Jekyll, many a times, I have been in a situation where I would try to implement certain features according to my needs.

For instance, recently, I was looking for a way to pin certain posts. What this feature should do is keep the pinned posts on the top of the list on the homepage no matter what. Currently, all posts are being listed in chronological order but pinned posts should be an exception to remain on top.

This feature is inspired by Twitter’s pinned tweets.

I was looking for a Jekyll plugin or something like that but I didn’t find any. So, I decided to implement it myself. Here’s how I did it.

The first step is to mark the posts as pinned. Since I was already using categories to categorize posts, I used the tags variable in the front matter to mark the post as “pinned” like so.

This will essentially mark the post as “pinned” and now we can use this flag to list pinned posts on top of all the other posts.

Since we now have posts tagged as “pinned”, we can list them at top of the rest of the articles using the following code like so.

As you can tell, you can loop over site.tags.pinned which will hold all the pinned posts. You should put this code just before the main loop starts.

Notice also that, I have added an additional check if page.url == "/" to only render pinned posts on the homepage. 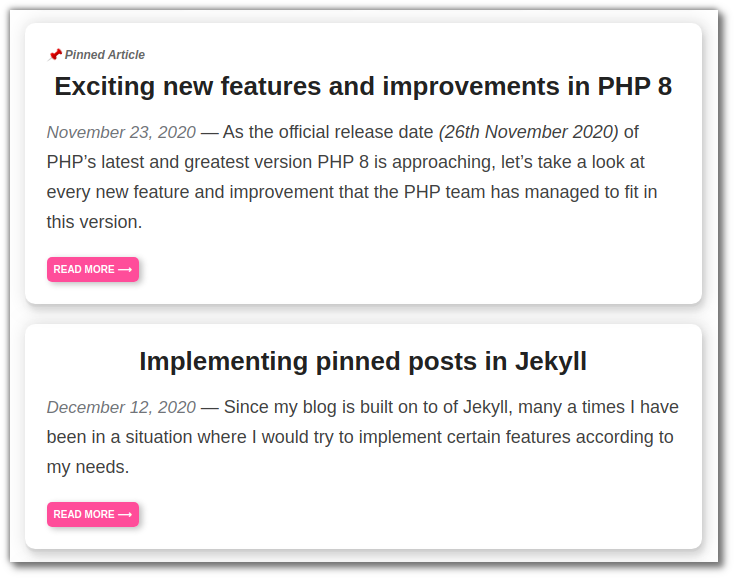 The last thing I did was to exclude pinned posts from the main list of posts because that is redundant and repetitive.

To do so, I added a check to only render the posts which are not marked as pinned in the main loop which renders all of the posts like so.

With this approach, you can practically pin multiple posts but ideally, you only mark a post as “pinned” at a time just like how it works for Twitter’s pinned tweets.

Previous: Get up and running with Laravel blazing fast using Sail Next: Delaying notifications channel-wise in Laravel 8.x